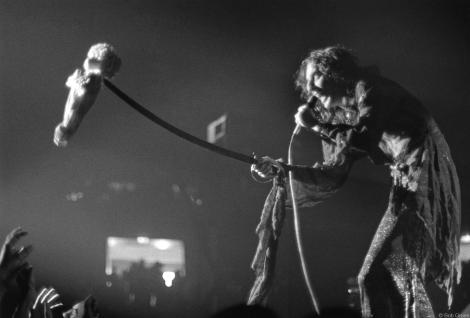 Last night I had a nightmare.

It was like an episode of American Horror Story – full of crime, horror, violence and sex. I experienced a deep revulsion to the story and to my place in it. I was, in dreamlike fashion, both victim and perpetrator.

This aversion to the uncomfortable wasn’t always the case. I remain a huge fan of horror films and scary stories. I believe they play an important role in our maturation and adolescence. And I believe in the power of these stories to show us the shadow parts of ourselves (and our society) that need to be brought to light. As a child, I was fascinated with makeup and gore and wanted to be a special effects artist like Tom Savini or Stan Winston.

But, as a father, minister and coach, I now feel I have competing commitments within my psyche. I feel that where I could once easily find a place for these tales of violence and depravity, it’s increasingly hard to justify a “reason” for some of the stories we tell today and the images that burn themselves into our minds. The dread and nihilism of my youth has come up hard against the pragmatic mysticism of my adulthood.

The ideas of “growing up” and “selling out” have been synonymous. So, how do you honor and celebrate your inner child while actually putting down childish things?

I had a typical white Midwestern childhood. When I was 4-7 years old I was really into fantasy storytelling (magic, knights and dragons). From 8-12 I discovered music and its ability to communicate feelings and ideas. I was fascinated by heavy metal and shock rock, listening to bands like Alice Cooper, WASP and Metallica. When I was 15, I moved to Florida and adjusted to the conformity of high school, college and a string of odd jobs. Around this time, I also rejected religion for scientific and philosophical inquiry. When I formed a band of my own, I quickly learned how to build community and gain consensus by swallowing my own anger or opinion. And, eventually, I found a home for all my passions (music, media, ministry), context for the healthy, integrated versions of my own anger and lust, as well as a place in my life for everyone inhabiting their own various stages of consciousness and connectedness.

Those familiar with Spiral Dynamics or Integral Theory will immediately recognize the colorful trajectory that I traveled as I moved through the developmental stages of Magic, Warrior, Conformist, Modern, Post-Modern and Pluralist. Most of us have similar arcs and similar stories.

When we use models like these to talk about our own growth, we must remember that the map itself will eventually be composted. When we invoke the idea of “transcend and include,” sometimes we leave out a very important part of the conversation. We can’t carry everything forward. We must constantly be shelving and filing as well as releasing and letting go. And, if we don’t choose something to release, something will be chosen for us. It may be song lyrics, movie trivia, mental maps of towns you’ve only visited, memories or moments with friends and loved ones. They will be torn from our fingers if we don’t lovingly put them to bed.

We must kill our babies, sometimes in violent and fantastical ways. We must embody the shadow, putting on the hockey mask and becoming the villain until we have laid waste to what doesn’t serve us, our family, or our community.

One day, we will be able to remove the mask for good – to look at ourselves in the mirror and see the integrated person – hero, villain, masculine, feminine, angry, compassionate, all ages, all stages – parts, wholes, inside and out.

Until then, we will remain at odds with ourselves. Our flesh turned inside out – twisted and wrung out like a rag. With one eye trained on our own contorted body and the other desperately scanning the world around us, we will be seeking answers that have never been demanded of us. Answers to questions that have never been voiced. Searching for something that has always been within.

Get Daily Sentences delivered to your inbox!